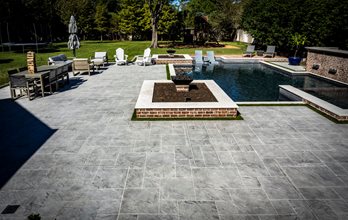 Using SunStone, SUNDEK of Houston resurfaced this pool deck to give it the appearance of slate for this backyard in Houston, TX.

Though they loved the look of their slate pool deck, two homeowners in Houston, Texas, didn’t love the slate as the material for their surface. Since slate tends to retain heat, it’s not the best option for a pool deck—especially when exposed to the sun all day. The homeowners wanted an upgraded pool deck: one that would be comfortable for bare feet on hot summer days, durable enough for frequent use, and aesthetically pleasing. They contacted SUNDEK of Houston to learn about the possibilities.

Get a free quote

Because they liked the appearance of the slate, SUNDEK of Houston’s general manager Jonathan Bullion suggested a SunStone coating. With SunStone, SUNDEK installers can create the look of real quarried stone—but with all the benefits of a concrete coating, and at a fraction of the cost. After applying the coatings, SUNDEK crews hand-carve the coating and stain it to create an authentic appearance. 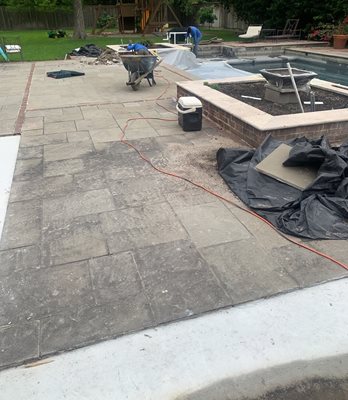 This image shows the pool deck before the slate was removed. Brick that surrounds the fire pit and planters was removed to create a spot for turf grass.

In addition to being beautiful, SunStone coatings are durable, easy to maintain, and slip-resistant—perfect for a pool deck at the home of a family with children. The homeowners liked the idea, so SUNDEK of Houston crews began the first phase of the project: removing the existing slate and brick from the surface.

“Removing an inch and a half of slate was a challenge,” says Bullion. In addition to pulling off the slate itself, crews had to remove layers of cementitious mortar that were used to adhere the slate to the concrete slab when it was originally installed. After the slate and mortar was removed, SUNDEK blended the surface to even everything out (using about 50 to 60 bags of blending cement), and grinded the surface to prepare it for the SunStone coating.

After the preparation phase was complete, SUNDEK of Houston crews took a small hiatus from the project while the homeowners had their pool replastered and coping installed. When they continued their work, Bullion’s team began by applying the basecoat, creating a smooth surface. After about 4 to 5 layers of basecoat were applied and smoothed out, they applied the SunStone coating. 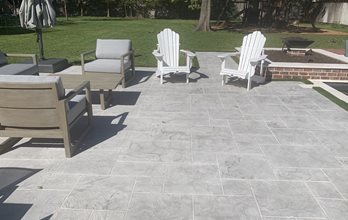 SUNDEK crews blended three colors together and hand-carved a Versailles pattern to create the look the homeowners wanted for their backyard space.

When the coating was ready, crews began laying out the Versailles pattern to visualize the design of the entire deck. Once crews and the homeowners were happy with how everything was laid out, SUNDEK used grinders to hand-score the pattern into the SunStone, making sure each scoreline was only about a quarter-inch wide—as requested by the homeowners.

Learn more about our pool deck resurfacing services in and around Houston.

To create the grayish-blue tone the homeowners were looking for, SUNDEK of Houston mixed three powdered colors together to create a custom blend. The neutral color of the stone complements the look of the travertine of the pool’s coping.

After applying the sealer for protection, the application was complete. The homeowners were thrilled with their new pool deck. In addition to being gorgeous, complete with strips of turf where the brick used to be, the upgraded deck is also safe, comfortable, and built to last for years to come.

See a bird’s-eye view and closeup shots of this project here:

Do you need resurfacing done on your pool deck?

Or fill out this form

See our coatings and stains at residential and commercial properties.

Get technical information, system guides, and more for all SUNDEK Houston products.

View the wide range of color options and brochures available through our various systems.

See outstanding SUNDEK projects from contractors across the country.

Useful tips to design and run your projects smoothly.